For those who don’t already know, I confess that I don’t spend much time attending to things like website updates. No excuse, really, just busy with other priorities. What, you ask? There are the usual survival things necessary for living in the woods: shovelling snow from driveway, paths, and roof, bringing in wood to feed the stove, cleaning the ashes out of the same stove and the creosote buildup from the chimney, making sure pipes and drains don’t freeze. I have also learned much more than I ever wanted to know about the art of drywalling. And when those things are done, I go back to writing 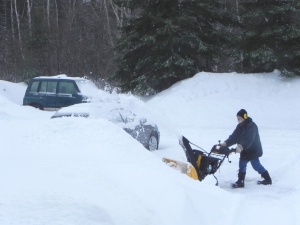 This is the parking area at the top of a hilly, curving driveway about 130 metres from the Cabot Trail

I am approaching the possible end of first draft on a new book. My goal is to be well into the rewrite before the snow goes away.

In other news, several festivals have invited me to attend this year, and I will post more details as they become available. The first is in Hubbards, Nova Scotia (not far from Halifax) the first weekend in May. Next is the Winterset in Summer festival in Eastport, Newfoundland early in August. Labour Day weekend I will be in St. John, New Brunswick and later in September, at Word on the Street in Saskatoon (not yet confirmed).

We have also been busy with the second annual Puffin Awards for Literary Excellence, a short-story competition for students at high school level in Victoria County, Cape Breton. The competition is open from February 1 to April 30. We are working on a website, but for now you can find information on our Facebook page under Puffin Awards.

One response to “Still kickin’”