The Promised Land: a novel of Cape Breton 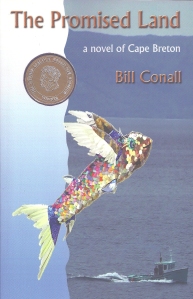 On April 24, 2014, The Promised Land – a novel of Cape Breton, was announced as the winner of the 2014 Stephen Leacock Memorial Medal for Humour. Out of a field of 80 entries, the other four finalists were:

And Then There Were Nuns – Jane Christmas

The award consists of a silver medal and a cash prize of $15,000 provided by the TD Bank Financial Group.

Synopsis: In 1970 a group of hippies make their way to the island of Cape Breton and that’s when the magic begins in Bill Conall’s novel, The Promised Land. The stories revealed throughout the novel show people at their very best: generous and kind, fallible and forgiving and full of mischief. Conall writes with an open heart and a gentle wit and takes us into the belly of a community teeming with goodwill and with characters you’ll want as your friends and neighbours. I promise you’ll laugh, and you’ll definitely wish you had been invited to the famous Hippies’ Ceilidh.” – Susan Zettell, author of “The Checkout Girl”

…told with Conall’s gift for sensitive humour and cultural insight.  Bill Conall’s first book, The Rock in the Water, was short-listed for the Stephen Leacock Award for Humour. The Promised Land shows a similar if not more successful promise. – Inverness Oran

Order from your local bookstore, including:

Purchase the e-book from:

“The Promised Land – a novel of Cape Breton”

4 responses to “The Promised Land: a novel of Cape Breton”